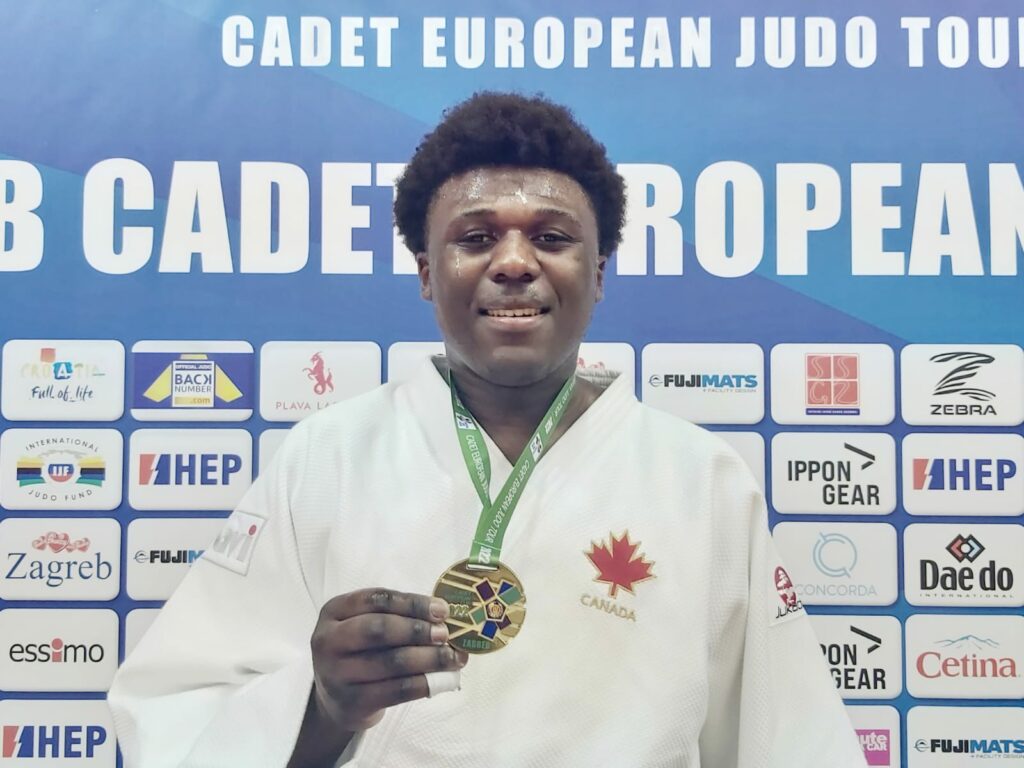 Montréal, March 13, 2022 – It was a perfect day for John Jr. Messé A Bessong (+90 kg) as he participated in his first-ever Cadet European Cup in Zagreb, Croatia. The Québécois performed flawlessly in all five of his bouts, earning the first gold medal of his career.

After defeating three opponents in his pool, Messé A Bessong moved on to the semi-final, where he locked horns with Tamaz Biganashvili of Georgia.

“I managed to conserve my energy through my first three matches. My strategy was to dominate all aspects of the fight. I wanted to keep him moving and tire him out so that I could score late in the match, and I managed to do that,” he explained after his semi-final win.

In the final, Messé A Bessong went up against Bogdan Petre of Romania. Despite the stress of the important fight, the Canadian remained calm and used his physical advantage to secure his victory. “I knew Petre wasn’t as strong as my other opponents. I considered the possible options and decided to focus on my strength, which paid off.”

Messé A Bessong’s coach Alexandre Émond is also very satisfied with his athlete’s performance today. He knew Messé A Bessong had great potential, but no international tournaments had taken place for the past few years. He therefore had been looking forward to seeing Messé A Bessong in action against some of the best in the world.

“It’s the best result we could have hoped for. We had a feeling he would do well in international competition, and he proved us right. We hope he’ll keep it up. His opponent in the final was smaller than him. He did well throughout the fight, and he was never in danger, which is what we want to see in key moments,” stated Émond.

After also putting in a perfect performance in his first three matches in the under-73 kg pool, Lasha Tsatsalashvili finished his day in fifth place after losing the semi-final to Luka Javakhishvili of Georgia.

He began his day with back-to-back victories over Martin Miesenberger of Austria, Ben Moore of Britain and Tigran Kryvytskyi of Ukraine. He then beat Lucio Tavoletta of Italy to advance to the semi-finals.

His two losses of the day came at the hands of Georgian athletes. First, he lost to the would-be gold medallist, Javakhishvili, and then was denied a bronze medal by Gigi Morbedadze.

“Lasha had six big fights today, and he dominated in those he won. He lost to two Georgians whose styles are similar to his. He has a ton of potential and he’ll learn from his mistakes as he competes in more major tournaments,” said Émond.

In the same weight class, Arthur Karpukov (Sport Etude Shidokan) lost his first bout of the day to Maj Kavnik of Slovenia.

In the women’s competition, Aliya Koliaska (-57 kg) lost her only fight of the day to Frida Medalje of Israel. Callie Render had a similar experience in the under-63 kg category, losing to Adela Simunkova of the Czech Republic.

This was Canada’s first participation in an international cadet tournament since the pandemic began. It was also the first-ever Cadet European Cup for all the Canadians in attendance. A total of more than 700 judokas participated in this weekend’s event.

Also Fahd Fithane (Shidokan athlete) received three penalties his under-66 kg match against Saba Samadashvili of Georgia. He then lost to Darius Ionescu of Romania in repechage.

Congratuations to all Shidokan athletes!

Written by Sportcom for Judo Canada